​
At the Unitarian Church of Hinsdale, our journey to installing solar panels started, formally, in early 2016. Our environmental committee, known as Green Sanctuary, had always mused about the possibility of installing solar panels, but we considered that it was too expensive and too complicated. Then, in 2015-2016, two things happened that gave us hope and momentum.

First, some background on our physical structure. The church owns two buildings, a stone church building that was built in the 1870s, and a brick religious education building that was built in the 1950s. The church building has a steep shingled roof that faces east and west; the RE building has a flat asphalt roof. The ideal location for solar panels would be the RE building roof, where panels could be installed to point south at the right angle to catch the sun. Both buildings have been served by gas-fired boilers for heating, and, as of 2016, neither building had air conditioning.

In 2015, our Green Sanctuary committee added a contractor as a member. Our new member gave us enough information about his experience in installing solar panels in residential construction that we realized that solar panels might be feasible for the church. At about the same time, the church learned that the flat roof on the RE building was in need of replacement. These two facts gave us the impetus to look into a broader project that would link the roof replacement with the installation of solar panels.

In early 2016, we started informal meetings to discuss the possibility of installing solar panels. The committee that eventually coalesced included our minister, the president of our board of trustees, the chair of the building and grounds committee, the chairman of the stewardship (fund-raising) committee, our builder, and the chair and another member of our Green Sanctuary committee. This balance of interests aided in our success in getting the support of the board, encouraging church members to support the project, complete the necessary research into technical and financial questions, and work with village government.

Once our discussions started in earnest, we discovered that we could package a whole set of infrastructure improvements into one major project. We learned that our boilers, dating back to the 1940s, were sturdy and reliable but had exceeded their useful lives. And, of course, they were nowhere near as efficient as more modern heating systems. In researching replacements, we found that installing electric heat pumps, which could provide both heat and air conditioning, were a viable and economical option. This led us to transform our goal from merely installing solar panels to a vision of a major capital project, with a new heating system, air conditioning for the first time in the church’s history, new windows to replace the 1950s-era drafty aluminum windows in the religious education building, new storm windows in the church building, a new insulated roof in the RE building, and, of course, solar panels. 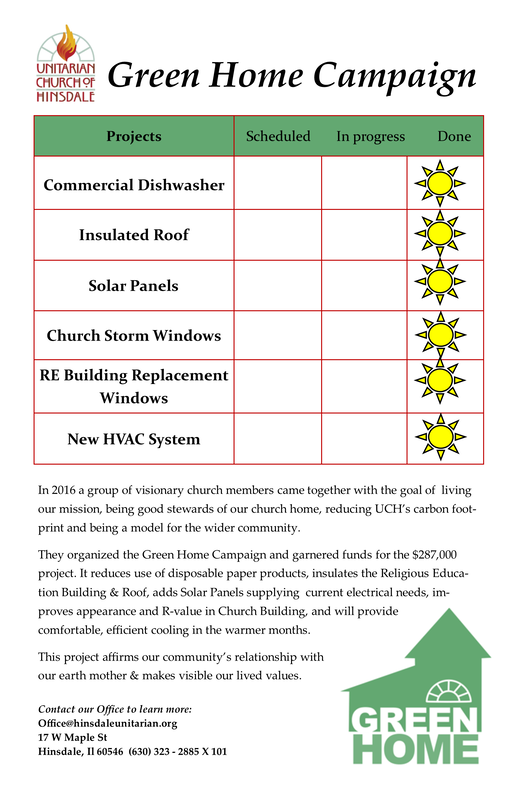 Now the challenge was to conduct a capital campaign to raise the money for all these improvements. We came up with a name and logo; our project and committee would be called “Green Home,” as we saw our church home as being new, improved, and green. We gave the board of trustees all the information we had about the scope and cost of the project, which would end up being a quarter of a million dollars (!) Through the summer of 2016, we conducted “café conversations” where members of the congregation could learn about the project, and especially where they could make their own suggestions about what green improvements we could make.

During 2016 and early 2017, we contacted contractors for all phases of the project—roofing, windows, solar panels, etc. Regarding solar panels, our big break came when we contacted Faith in Place. Faith in Place is a multi-faith organization that assists religious institutions of all denominations, thoughout Illinois, in finding ways to better serve the earth and our environment. Faith in Place connected us with a contactor and investor that would make solar panels feasible and affordable for a congregation like ours. We would encourage any faith community in Illinois—or even in other states—looking to invest in solar panels to contact Faith in Place.

We know that there are federal and state tax programs that make solar panels more affordable for homeowners and businesses. But for a tax-exempt church, what benefit do these tax programs have? The contractor we hired was able to leverage the tax savings to benefit a non-profit organization like our church. The model that they offered was to have an investor purchase the solar panels and lease them to the church, with an option to buy the panels at the end of the lease. Our terms were a six-year lease, with an initial down payment; monthly payments about equal to the monthly electricity payments we were already making; and a final payment at the end of the lease, which paid for the buy-out of the solar panels at the end of the lease. After the six-year lease, we own the solar panels, and all the savings on the price of electricity belong to us. The solar panels have a 20-year warranty, so we can expect savings on our electric bills for at least 20 years into the future. Because a private investor owns the solar panels for the first six years, the system owner is entitled to all the tax savings—which are passed along to the church in savings on the cost of the system. This is the key to the affordability of solar panels for a church or other non-profit; have a private company or investor purchase the panels, lease them from the owner, and take advantage of the tax savings by reducing the overall cost.

We worked with our installer to design a system that was right for us. With several years of electric bills on hand, we knew what our typical electricity needs were, from month to month. We ordered a system that would provide approximately all the electricity that we were currently using in both our buildings. It worked out that the solar panels we needed to produce that much electricity covered most, but not all, of the flat roof on the relgious education building. The panels point south, and we don’t have any tall trees south of the building to shade the roof on sunny days.

Since we needed a new roof on our religious education building anyway, we coordinated the installation of the new roof with the installation of solar panels (the new roof included insulation to increase the R value substantially). The windows in the RE building were the old-time aluminum windows that conducted cold air even when shut tight, and had become leaky and drafty over the years, to the point that our RE students often had to wear hats and gloves on the coldest winter days. Our new windows are tightly sealed and double-paned, and filter out UV and infrared rays.

Fund-raising for the major project required a capital campaign. This is often a source of fear and trepidation for any congregation; but anecdotal experience of people in our church, and statistical evidence from churches across the country, suggested that church members will go above and beyond to contribute to a major capital campaign, without any adverse effect on annual giving, if they can see the need and benefit of the major infrastructure changes. And this proved true in our own church. With the recommendations of the board and minister, and the outreach through “café conversations” and announcements during church services, our members were ready to step up to the plate and make it happen. Of course we counted on some big donors to do the heavy lifting, but a feature of our Green Home fundraising was that we wanted every member to contribute—even a few dollars—so that we could point to our improvements and know that everyone in the church had had a hand in making them happen.

The capital campaign was a great success. We raised a quarter of a million dollars, from contributions both big and small, over a space of just over a year. And, churches will be happy to know, these additional contributions did NOT have an adverse effect on annual giving. Our annual pledge campaign raised just as much as the year before, or even more. And our membership can take pride that they came together to update our infrastruction and make our church home smart, green, and efficient for years into the future.

A very important part of any major infrastructure improvement, especially one that is visible to the community such as solar panels, is approval by local government. Every city, town, and village has its own governmental and political systems, customs, and procedures. This is why it is so important to have a contractor, or architect, at your house of worship involved in the project. The builder who was a member of our Green Home committee had previous experience with our municipality and knew the people, the forms, the procedures, and the pitfalls. We can report that the only surprise was that the process went so smoothly. We worked with the village plan commission, and then the village board, and were happy that, not only did the village officials not oppose the project, they were enthusiastic about the prospect of having a large-scale solar project so close to the center of the village (our church was built over 140 years ago and is very close to the central business district).

By the spring of 2018, we knew that we would have enough funding to make the entire capital project happen. During 2018-2019 the construction and installation proceeded. First the religious education roof (which had become such a leaky sieve that frequent repairs and placement of buckets and trashcans had become commonplace) was replaced; then the windows in the RE building, storms in the church building, and concurrently the heat pumps and solar panels were installed. Our church can now hold services throughout the summer without martyrdom, our children are warm during winter RE, and our church staff (whose offices are in the RE building) can work through the summer in comfort. The solar panels came on-line in the fall of 2018.

So how is it working? How much electricity are you generating? How much money are you saving? These are, of course, the key questions for any solar panel installation. And we have to tell you, we can’t tell you. As we have described, concurrent with the installation of the solar panels has been the installation of electric heat pumps the provide all the heat, and newly provide air conditioning, for both buildings. So our total electric use has gone up substantially. But we can say a few things for sure: Our solar panels come with an app that tracks the amount of electricity we are producing, by the day, the month, and the year. We have been able to see that the amount of electricity we are producing is about what was promised. In the summer months, before the installation of the air conditioning, we were producing even more electricity than we were using. Our electric bills are definitely lower, even with the increased electricity we are now using, both for air conditioning during the summer, and for heating in the winter (remember that we are using electric heat pumps, rather than gas boilers, to heat both buildings).

This is an overview of the experience of the Unitarian Church of Hinsdale in installing solar panels, along with other major infrastructure changes, in our two buildings. If you would like more specific information about our experience with costs, contractors, and government processes, please contact us at office@hinsdaleunitarian.org.